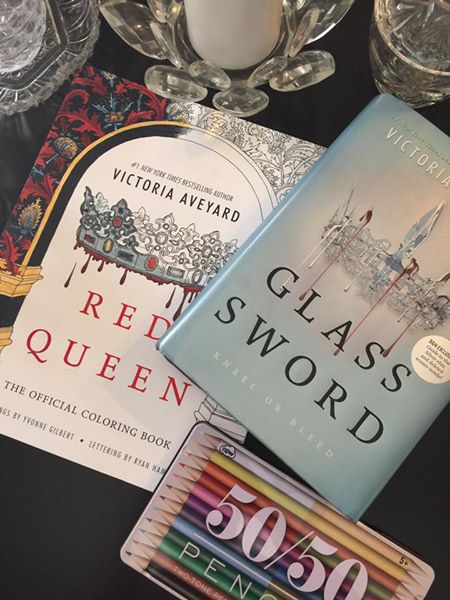 Glass Sword, thankfully, does not suffer from Middle Book Syndrome. Instead, Red Queen gave the Glass Sword a dose of steroids. Much darker and more brutal than its predecessor, with less humor, but necessary for the story to unfold properly. With every page, a new twist and turn had me begging for more in anticipation of what would happen next!

Mare and Cal barely escaped the Bowl of Bones, with the help of the Red Guard. Mare finds new purpose in finding all the others who have red and silver blood like her; and hopes to save them, as well as Cal and herself, from Maven’s wrath… Mare’s heart has hardened after Mavens ultimate betrayal. Now away from Norta, all the feelings she pushed aside come crashing down, she fears her anger will turn her into a monster, the lines have blurred on what is right and wrong. Is she just as bad as the enemy?

Okay, I am going to get my grievances out of the way. There were a TON of new characters. I could not keep them straight, there should have been a character map, seriously. Not to mention, the multiple scenery changes, I got lost a time or two. That’s all I can say negatively, though.

When I say Glass Sword is on steroids, I mean it. The gore, betrayal, action, and violence is to the max. There is no glitter of the court to mask the evil world Mare lives in. Not anymore. It’s down to the nit and gritty of the war, and their fates. And as mentioned before, the humor may be less, but the romance was taken up a notch, with a black cloud over their lives, it was a nice reprieve from the constant turmoil and action. I’m not opposed to mass amounts of heart-stopping-wtf-is-going-to-happen-action, though; I thrive on it. I guess in retrospect, the fact that I FELT the dark-cloud of Mare’s mental state is a sign of good writing. I just may need a very large glass of wine now, or a Disney movie. Something.

I do hope the final book can keep the same fast pace. The cliffhanger ending has me very intrigued on Aveyard’s next route. I do hope the mood will be lightened just a tad, without compromising the story.