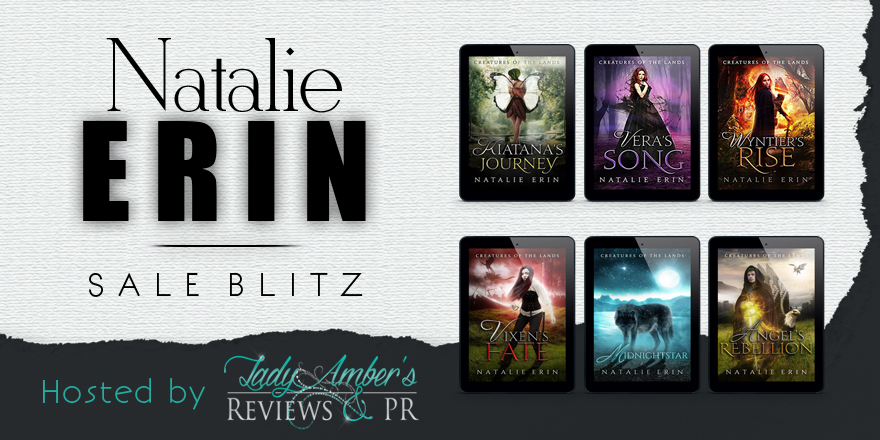 In the Lands, animals can speak, elves battle mythical beasts, and shifter-vampire hybrids hunt mortals. Princess Kiatana rules over this realm– until a dark force rises and threatens to steal her throne.

A dragon and his rider have brought war to her world. Magic will save the realm, but a traitor hides in plain sight. A quest to defeat the evil that has possessed the land has begun.

The undead will rise. Friends will fail– and Kia will find herself falling for the man she least expected.

This is her kingdom. It’s time to fight back.

Read an Excerpt: Creatures of the Lands

-What do Readers Think?-

Readers love Kiatana’s Journey, a book that has been classified by fans as Game of Thrones meets Narnia. Sarah J. Maas readers are obsessed with this bestselling series!

USA TODAY BESTSELLING AUTHOR Megan Linski and renowned poet Krisen Lison join under the penname of Natalie Erin to bring readers the Creatures of the Lands series. A high fantasy series adored by readers all around the globe.

“Intriguing, funny, and fresh. Kiatana’s Journey was a fantasy story I couldn’t get enough of.” – Hayley’s Reviews★★★★★

“This is a fantastic read, keeps you intrigued to the very end. This will be a Journey to remember.” – Brandy’s Book Review★★★★★

GET THE CREATURES OF THE LANDS: THE COMPLETE SERIES BOX SET FOR 70% OFF! LIMITED TIME OFFER!

Natalie Erin is the pen name for the writing team of Megan Linski and Krisen Lison (also known as Krystyl Lisoh).

Krisen Lison (pen name Krystyl Lisoh) was an author and poet. She is known for her bestselling Creatures of the Lands series, as well as her poetry collections Memoirs of a Teenage Poet and Living as Me, and her short story collections Death, Life and Other Things and Humpty Dumpty Sat on a Wall. Her work has been featured in multiple magazines and public forums. She passed away from suicide in 2013.

Linski is a passionate advocate for mental health awareness and suicide prevention, and is an active fighter against common variable immune deficiency disorder.