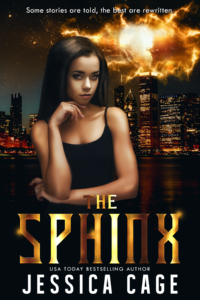 Some stories are told, others are not, the best ones are rewritten.

Stories are told of the sphinx—a monster with the head of a woman, the body of a lioness, the wings of an eagle, and a tail tipped with the head of a serpent. This beast was told to have been made to guard the entrance to the Greek city of Thebes. For each traveler to cross her path, a riddle was presented. If they could answer it correctly, access would be granted. What was her riddle?

“What is the creature that walks on four legs in the morning, two legs at noon, and three in the evening?” The price to pay for answering the riddle incorrectly, which of course they all did, was not a simple denial of entry to Thebes. Instead of turning them away, the sphinx, monster that was, strangled them with her tail and devoured them whole.

The story goes that when it finally came to pass that someone could answer her riddle and the consecutive ones to follow, she committed suicide. What else was a girl to do? Some say she threw herself down from the high rocks and fell to her death, while others say that she devoured herself, subjecting herself to the same punishment she dished out to all those who had failed before, a talented feat.

However, the question remains … what really happened to her?