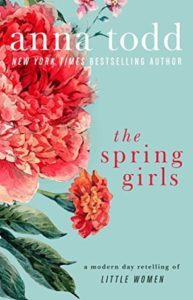 A modern retelling of LITTLE WOMEN! The Spring Girls by Anna Todd.

Four sisters desperately seeking the blueprints to life—the modern-day retelling of Louise May Alcott’s Little Women like only Anna Todd (After, Imagines) could do.
The Spring Girls—Meg, Jo, Beth, and Amy—are a force of nature on the New Orleans military base where they live. As different as they are, with their father on tour in Iraq and their mother hiding something, their fears are very much the same. Struggling to build lives they can be proud of and that will lift them out of their humble station in life, one year will determine all that their futures can become.
The oldest, Meg, will be an officer’s wife and enter military society like so many of the women she admires. If her passion—and her reputation—don’t derail her.
Beth, the workhorse of the family, is afraid to leave the house, is afraid she’ll never figure out who she really is.
Jo just wants out. Wishing she could skip to graduation, she dreams of a life in New York City and a career in journalism where she can impact the world. Nothing can stop her—not even love.
And Amy, the youngest, is watching all her sisters, learning from how they handle themselves. For better or worse.
With plenty of sass, romance, and drama, The Spring Girls revisits Louisa May Alcott’s classic Little Women, and brings its themes of love, war, class, adolescence, and family into the language of the twenty-first century. 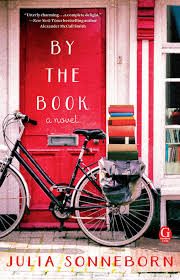 A modern retelling of Jane Austen’s PERSUASION! By The Book by Julia Sonneborn.

An English professor struggling for tenure discovers that her ex-fiancé has just become the president of her college—and her new boss—in this whip-smart modern retelling of Jane Austen’s classic Persuasion.

Anne Corey is about to get schooled.

An English professor in California, she’s determined to score a position on the coveted tenure track at her college. All she’s got to do is get a book deal, snag a promotion, and boom! She’s in. But then Adam Martinez—her first love and ex-fiancé—shows up as the college’s new president.

Anne should be able to keep herself distracted. After all, she’s got a book to write, an aging father to take care of, and a new romance developing with the college’s insanely hot writer-in-residence. But no matter where she turns, there’s Adam, as smart and sexy as ever. As the school year advances and her long-buried feelings begin to resurface, Anne begins to wonder whether she just might get a second chance at love.

Funny, smart, and full of heart, this modern ode to Jane Austen’s classic explores what happens when we run into the demons of our past…and when they turn out not to be so bad, after all.

Out Feb 6th! Mark your