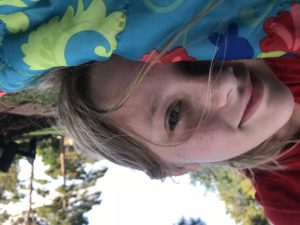 A mother recalled the phone call from her daughter, a student at Santa Fe High; “Mom, they are shooting up the school. I’m hiding in a closet. I love you, Mom.”

When the shooter entered the art room, he shouted ‘surprise motherfuckers.’ When he killed someone, he would sing ‘another one bites the dust.’

Her daughter was hiding in the art room closet, only feet away from a monster who managed to get a gun . She was the only one in the closet with a phone, the others had abandoned theirs inside the classroom. As they waited for help, their phones were ringing non-stop, no doubt their parents freaking out and calling them.

The shooter taunted them through the door, “Do you think it’s for you? Do you want to come answer it?”

He asked them if they were dead yet, they said nothing in response. He shot into the closet.

He screamed ‘woo hoo’. Then shot into the closet.

The daughter laid next to her dead friends, covered in their blood, wondering if she was next. Her mother rushed to the school, consumed by the same thought. Her daughter could be dead.

Parents were told to avoid the area. No way, right? People abandoned their cars and ran to the school on foot. Community members came and handed out water to the waiting parents. Everyone was helpless.

She lived. The girl made it out alive, but not unscathed.

Later that night, the girl in the art closet received a slew of text messages blaming her for not doing more to save her friends. Let me repeat: Her peers were blaming her.

The news took a different route and blamed another young woman. The headline I read yesterday on MULTIPLE reputable news sites said ‘Young girl provokes shooting.’ Want to know how she somehow made a boy lose his shit and kill people? She turned him down and embarrassed him. So now it is her fault he went on a massacre. Let that sink in.

My best friend texted me saying there were at least fifty police cars and a SWAT truck flying by her. And there was a life light helicopter and ambulances leaving the direction of the school.

It is too close to home, we thought. Words we knew we would say eventually, but dreaded, and wished like hell it wouldn’t be our town. That’s the thing, it’s not ‘if’  a shooting will happen. It is ‘when’ will the shooting happen.

Every morning I drop my daughter off and think to myself, is this the day she is sent home in a body bag. My brain goes into the darkest places. I used to think I was overly paranoid, now I realize I have a reason to be.

I work from home right next to her school. Every time I hear a police siren, I wonder if it is on the way to her school. I sit quietly, fingers hovering above my keyboard, hoping the police car doesn’t pull into my neighborhood. It’s like after 9/11, whenever we heard planes in the sky, we all froze for a moment- waiting. Waiting for the nightmare to start. Utterly helpless.

None of us are shocked. We are numb. We are used to it. Columbine rocked our worlds for years. These shootings only rock us for a few months, or until the next massacre occurs.

I got an email from the district saying they put in five cameras outside the high schools after the Orlando shooting. Big fucking whoop. Would that camera have stopped the shooter, a STUDENT, from walking into class? Fuck. No. He was allowed to be there, it was HIS school. The doors were open for HIM.

I told my ten year old daughter, “I wish we had metal detectors.” I sadly had to explain to her what happened , as it is right next to us, and kids will start talking about it.

She asked, “Why don’t we?” I didn’t know the answer to that. I told her maybe because of money, or it would cause long lines to get into school. I wasn’t sure. You know what my ten year old said? “Waiting in line is better than being dead.”

What are we going to do? Because I’m tired of dropping my kid off and wondering if today is the day. I’m tired of looking at every person around the school as a threat. When I walk back to my car, the images of school shootings flood my mind. I wonder if the victims felt something different in the air that morning, like a gut feeling something was going to happen. Then I feel a wave of fear wash over me. Is this my gut feeling? Should I check her out? Is today the day?

I’m tired of my ten year old having more voice of reason than those who are actually in charge.

I’m pissed that a week ago I was excited for summer because I could turn my alarm off. But now, I am anxious for summer so I don’t have to worry about my child being shot while at school.

I don’t know what the solution to this problem is. It is way above my pay grade. One thing I can say for certainty, there is not ONE answer.

More security at schools? Yes. Bullying prevention? Yes. Stricter Gun Laws (No, I’m not taking about taking your guns away *rolls eyes*) The list goes on and on and fucking on.

One way I am going to help is by once again joining the PTA, and being an active child advocate. The government can’t ignore thousands of pissed off moms who are on the same mission. But, I’d surely like to see them try.

Side Note: My Scottish friend messaged my husband and I to check on us after everything happened, he said “Your country is mad, Madam.” Over there, guns are pretty much nonexistent, and yes their crime rates are much, much, so damn much lower. But I know that isn’t an option for our country, we are too invested in our right to bear arms, and I realize, understand, and accept this. (Not going to lie, I like target shooting with my brothers AK.)

Guns, although obviously a major part of the problem- duh, are not the only problem. Double duh. Our culture has changed, as a friend put it on Facebook. The people behind the guns have changed. That’s a big fucking problem.