***DO NOT READ THIS REVIEW IF YOU HAVE NOT READ THE LUX SERIES OR THE DARKEST STAR!*** 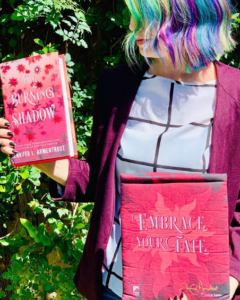 When Evelyn Dasher crossed paths with Luc, she was thrown headfirst into the world of the Lux—only to discover that she was already far more involved in their world than she ever suspected.

Because the Luxen aren’t the only ones with a hidden past. There’s a gap in Evie’s memory, lost months of her life and a lingering sense that something happened, something she can’t remember and nobody is willing to tell her. She needs to find out the truth about who she is—and who she was. But every answer she finds only brings up more questions.

Her search for the truth brings her ever closer to Luc, the Origin at the center of it all. He’s powerful, arrogant, inhumanly beautiful, extremely dangerous…and possibly in love with her. But even as Evie falls for him, she can’t help but wonder if his attraction is to her, or to the memory of a girl who no longer exists.

And all the while, a new threat looms: reports of a flu-like, fatal virus that the government insists is being spread by Luxen. A horrifying illness that changes whoever it touches, spreading panic across a country already at its breaking point.

Without fail, every JLA book provides the romance, action, and humor. This book being no different. I’m still diggin’ the dystopia vibes, and the world building involved hasn’t missed a beat thus far. Lots and lots of death, which is my (probably unhealthy) guilty pleasure.

Reviewers are told to not compare books to each other, but y’all, it’s hard. Is this as good as the Lux Series? No. But is it worth the read? Yes.

I cried, I laughed, I enjoyed the amped up romance being center stage, but I feel like I’ve been here before. I’ve read all of JLA’s books, and the similarities in characters personalities, plot-pacing, and humor, is very much the same, but longer.

The problem with pacing being similar, but the book being longer, is you have to wait quite a while for the story to truly take off. But when it did, it DID.

Also, I really like the hidden message here- you know, the whole being a racist a-hole thing NOT BEING OKAY.