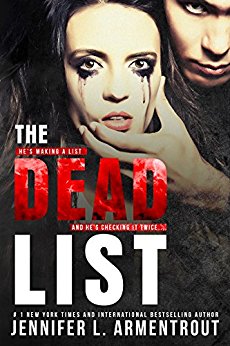 When Ella is mysteriously attacked on her way home from a party, her entire life changes as she finds herself at the center of an attempted murder investigation.

Ella tries to move on, but her attacker isn’t done yet. He shows himself in the form of horrifying signs and symbols: a clown mask strewn on her bed, a dead bird in her backpack, a shadow moving past her window in the night. And as the weeks pass, it turns out that Ella isn’t the only one being tormented.

With the help of an old flame, Jensen Carver, and her friends and family, Ella tries to attain some sense of normalcy, but she can’t seem to shake the feeling that there’s a dark pattern hidden in the killer’s every move. Suddenly, even those in her innermost circle seem suspicious. In her seemingly safe West Virginia town, Ella starts to wonder who she can trust.

One thought on “-The Dead List By Jennifer Armentrout-”