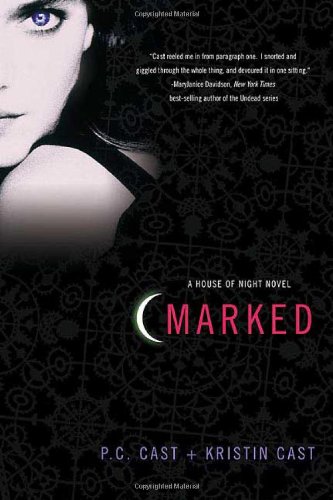 Imagine Mean Girls but with vampires; except the heroine is not as lovable as Cady Heron. I finished Marked, so that means it’s not a terrible read, but not a book I would suggest to anyone, either.

Vampyres are chosen (Marked), and sixteen year old Zoey has been Marked. Once Marked, she is then sent to the House of Night, where she will learn all things vampyre, as long as she lives through the change from human to bloodsucker. Quickly after arriving at the House of Knight, she learns that her vampyric abilities are particularly special. But being special is equivalent to putting a target on your back, and the popular girls are ready to aim. In the midst of all of the high school drama, Zoey has suspicion that the popular girls are up to something bad, and it is up to her to find out.

Marked is written in first person through Zoey’s perspective.  Marked could have been a fabulous read. There is a sea full of vampire tales, and this was a really unique take on it. Unfortunately, the authors have gone on record to say they’re proud of how the characters sound like true teenagers. Um… So what they’re basically saying is, teenagers are self-absorbed, annoying, and lack common sense.  Unfortunately, our main character was the most pretentious of them all. This would be more therapeutic if I just wrote a list as to why she annoyed me. So here goes:

I do not enjoy bashing an entire book, so to be clear, I am only bashing the main character (lol). Like I said, Marked is very creative! I just do not think I could suggest it to anyone. New adults, adults, and adults who aren’t exactly adulty (me), will cringe at the cliché teeny bopper dialogue. I also would not let a teenager anywhere near this series, the sexual content was DISGUSTING and uncomfortable… And I read erotica.