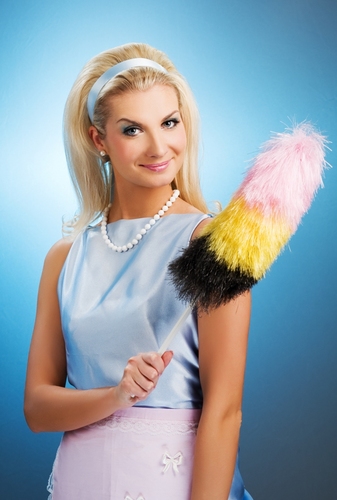 I’ve learned a new term this week, it’s called a ‘Mary Sue’. Basically, it’s a character that can do no wrong, and somehow, everything always works out for them. Which is boring and predictable, right?

I’m in a rock and a hard place. I am sick and tired of reading about wounded women. Why must we have some deep rooted internal issue that needs to be worked through? I understand the need for drama and internal dialogue, but damn.

I started googling common character flaws, and this is the popular ones that pop up:

These character flaws have been DONE. TO. DEATH.

I found my solution. A flaw doesn’t necessarily have to be something “wrong” with the character. A flaw can be something that doesn’t need to be fixed. A character can be well-adjusted and not boring AF. It’s possible. Well, almost. No one is perfect, we no doubt all have flaws, but does that mean a persons story ARC needs to revolve around these flaws?

Absolutely not. Don’t ever feel obligated to damage your character for the sake of making them relatable, there are other ways to do that.

Another solution? The character can stand strong in the middle of chaos. Let the uncontrollable variables around them be the flaw. Not the person. 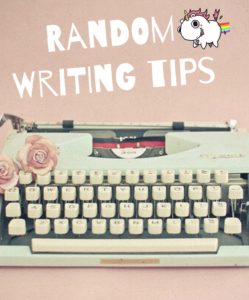 We will file this under ‘things not to do while writing.’ On the brighter side, at least the teens are writing! 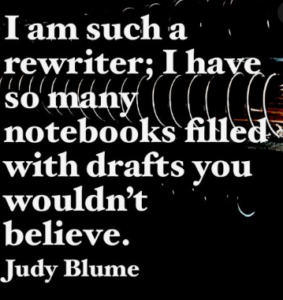 This quote gives me LIFE. I am such a rewriter; my guilt has washed away because of you, Judy Blume.

I’m totally not fact checking this quote, either. If it’s not true, I do not want to know.

BUT! I saw an author, Emma Hart, post a photo of her desk and there was this book next to her keyboard titled ‘The Emotion Thesaurus“. Immediately bought it. And so glad I did.

Here’s a little tip from inside these magical pages: “When revising, look for instances where emotions are NAMED. Nine times out of ten this indication is a lack of confidence that the emotion is shown clearly through thought, sensations and body language. Strong verbal cues negate the need to “explain” the emotion to the reader.”

So true, Magical Thesaurus. So. True.

Basically, when your characters about to feel something, you go to the table of contents and click on that feeling, then up will pop physical signals, internal sensations and mental responses of that emotion.

Internal Sensations: Sound of a heart thrashing in your ears, pain in the chest, increased strength or stamina, clenched jaw.

Mental Responses: A compulsion to look back, risk taking, hyper-vigilance.

I’m not a naturally eloquent writer, so this book has literally saved me. Maybe one day i’ll dish out lines like “a wry grin twisted up at the thought.” But today is not that day.

It’s day two of NaNoWriMo; I’m kicking ass and taking names… so far! I’m trying really hard to avoid overdone plots, cliche love triangles, blah blah blah. Even though I L-O-V-E reading them. So what better way to drill them into my head than to make a list?

This is just the tip of the ice berg. The more I write, the more I will add. Happy Reading, Y’all! 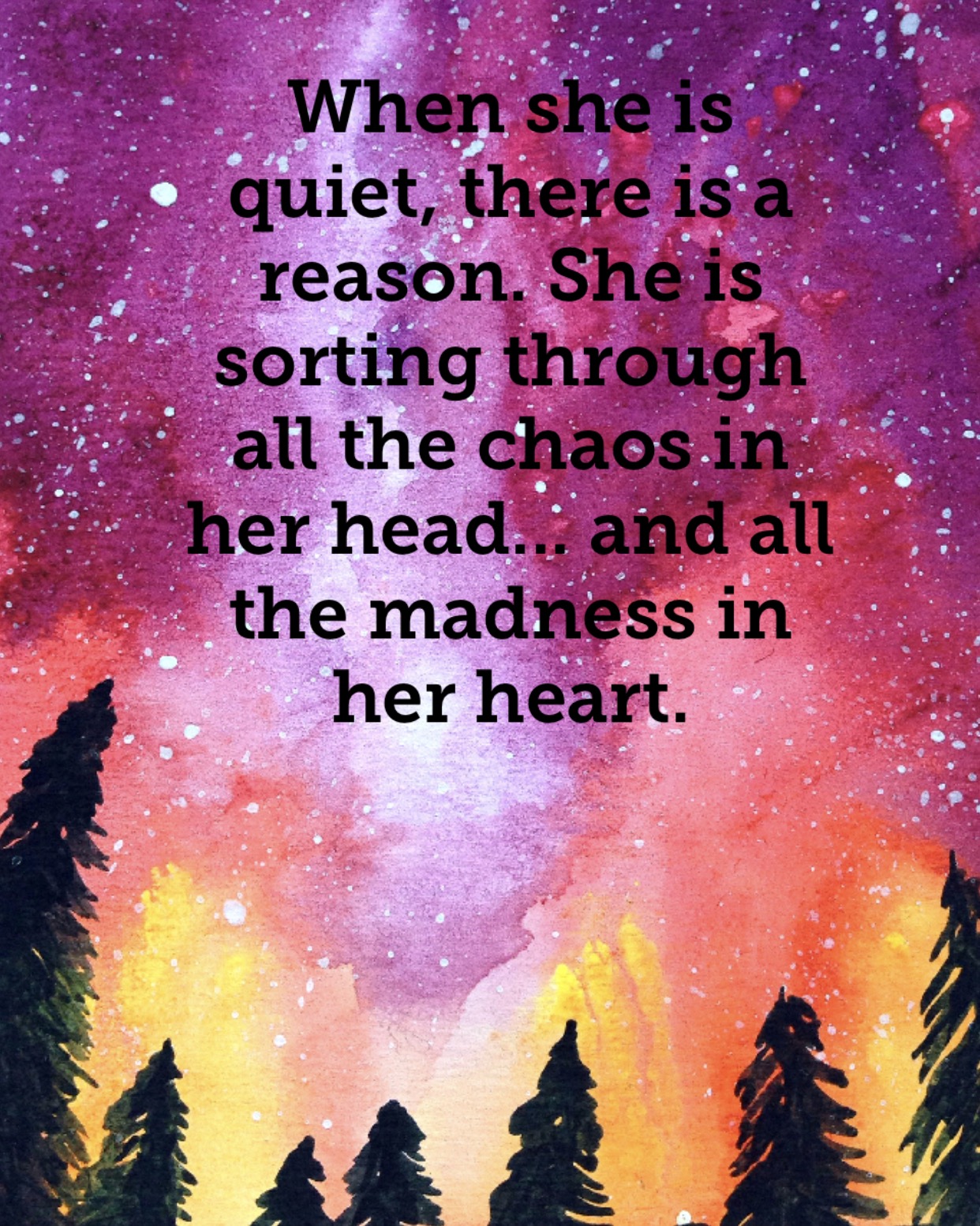 ONE: First Drafts are acts of discovery, like searching for one particular star within the vastness of the universe. – Natasha Halester

2. The very worst mistake you could make when entering the first editing process of your drafted novel is to head straight on into it. Wait at least a month before you edit.

3. A good novel shouldn’t be rushed, and you don’t want to be fixing countless plot holes in your second draft. Take your time to address them.

4. *Bye, Bye Weak* Everything in you novel, from the story to the characters, must serve a purpose. If they don’t, then cut them.

6. This is the most important. You have to FINISH THE FIRST DRAFT. I know, it’s hard. You want to start over, scream, cry, and pout. But keep pushing! FINISH IT. You don’t have to have it all figured out to keep going.

7. Rewrite the first page to hook your readers. Now that you’re finished, you have a better idea of what your story is really about.

9. Don’t be afraid to cut parts of your book that aren’t working and start afresh- maybe the cut pieces was vital preparation for something much better. -Now Novel

10. Try not to become and alcoholic.

1. I think the best piece of advice I ever got was from an author of locally popular novels that visited my school when I was in grade eight. He said that when you want to write a novel, or any kind of story, the typical system of “What is my story about? Who is it about? What will happen?” are pretty much the worst thing you can do.

Writing is far simpler than that. His advice was to ask yourself three questions that I’ll never forget:

Who is the character?

What does the character want more than anything?

And how can I prevent them from getting it?

2. IMAGERY: ‘DON’T SHOT ME THE MOON IS SHINING, SHOW ME THE GLINT OF LIGHT ON BROKEN GLASS. -ANTON CHEKHOV

3. Writing Prompt: Write about the worst physical pain you’ve ever experienced using all five senses. (I think this could go for emotional pain, as well.)

5. When To Tell, Instead Of Show: When you need to move a reader quickly from one location to another. When you’re repeating information the reader already knows. When you want to spare the reader boring, non vital filler information and get back to the action.  – The Invisible Author 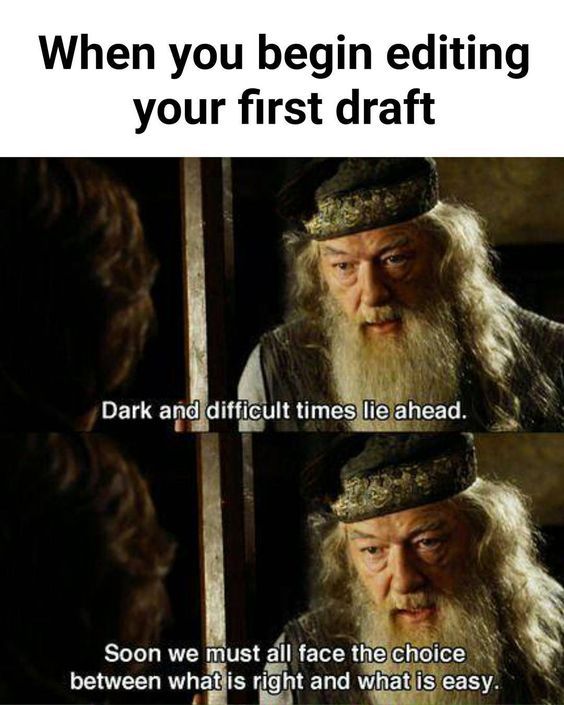 1.  On Foreshadowing: Anton Chekhov once said that if a gun is introduced in a story, it must be fired at some point. Readers may feel cheated if you don’t develop the coming incidents you’ve teased.

2. Dialogue Errors: Your dialogue may not sound natural. Read it aloud. In fact, read every thing aloud. It helps.

4. Tension in a story by Inkandquills.com

5. From the 10 Minute novelist: Does you first pages have these?

Do you set the stage for the story?

Do you clearly introduce your protagonist?

Do you determine your point of view & Narrative?

Do you introduce a theme?

Do you worry too much about likability?

Do you have a lot of action?

Do you explain the status quo?

Do you explain the deepest longing of the protagonist?

Do you have an inciting incident?

Does your main character cross a threshold?

Do you ask a lot of exciting questions?

REMEMBER: THESE ARE SUGGESTIONS, THERE IS NO ONE FORMULA FOR WRITING AN EPIC NOVEL. HAVE FUN, DON’T GIVE UP, EVEN START OVER AS MANY TIMES AS YOU NEED (I SURE THE HELL DO).

DO WHATEVER WORKS FOR YOU!

Bonus: (Need this for myself)

Change paragraphs when… A new character comes alone. A new event happens. A new idea is introduced. The setting changes. A new person is speaking. Time moves forward or backward a lot. “The camera moves.” 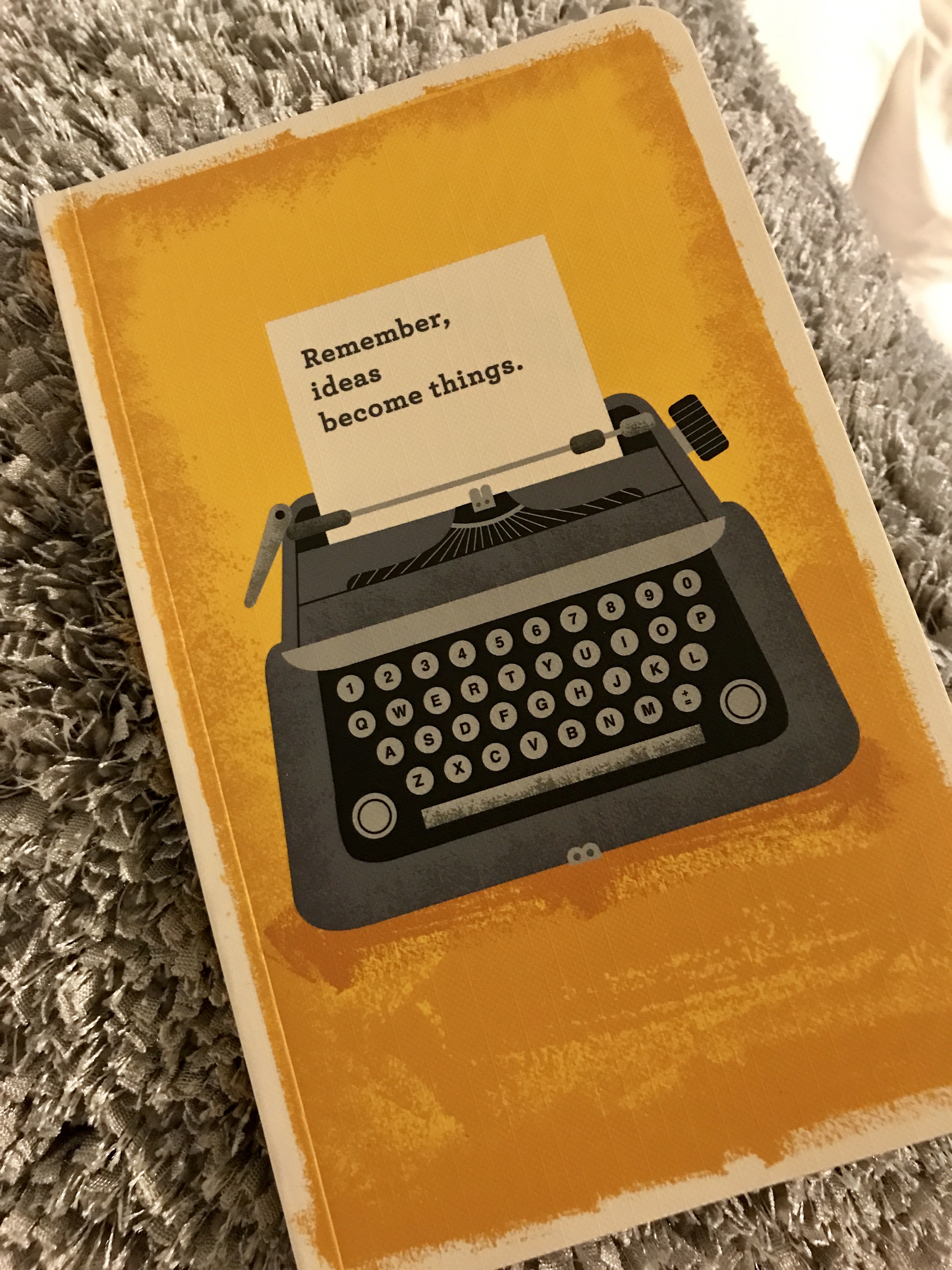 I bought this wonderfully cute notebook at World Market today. Inside are tons of writing tips and inspirations! Here are my favorites:

Steal from anywhere that resonates with inspiration or fuels your imagination.

Select only things to steal from that speak DIRECTLY TO YOUR SOUL.

Everything has been done. So you just have to DO IT BETTER.

“What is now proved was once only imagined.” -William Blake

ON A SIDE NOTE: There is a major difference from being inspired and straight up jacking something. I think that’s why I love these quotes so much… It’s okay to pull tid-bits of things you love and turn it into this one large ginormous ball of awesomeness- that YOU created. 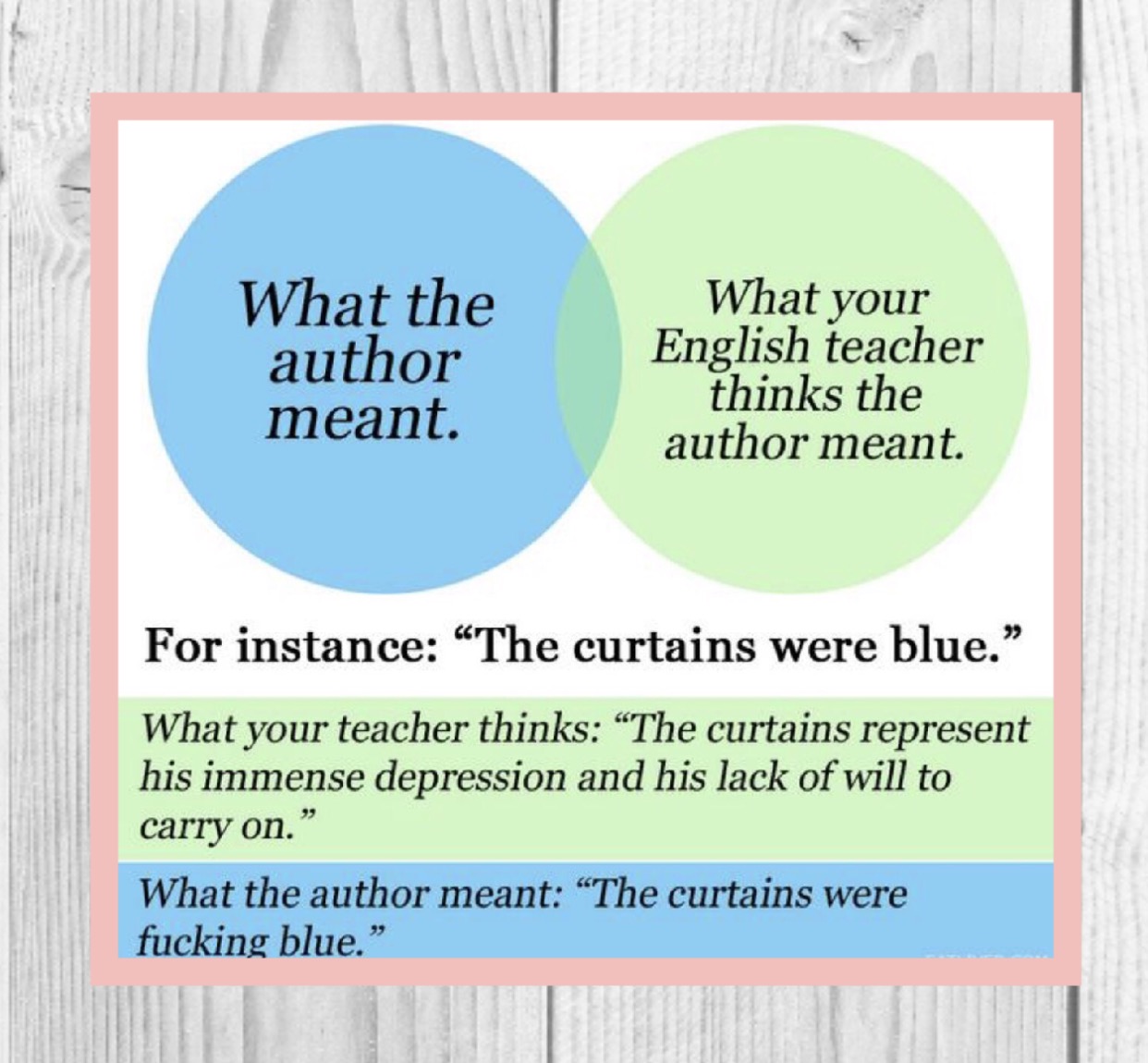 10. REMEMBER! THESE ARE TIPS, TAKE WHAT WORKS FOR YOU AND LEAVE WHAT DOESN’T. THERE’S NO ONE RIGHT WAY TO WRITE.