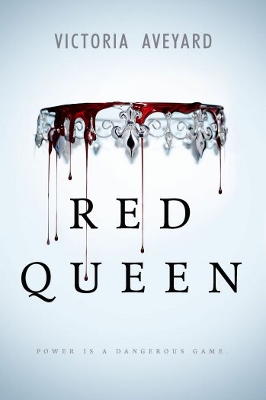 How amazing is the Red Queen? Well, I was so engrossed, that I attempted to eat hot wings and read at the same time. I put an entire bone in my mouth without realizing and almost died. It’s that good.

The Red Queen reminded me of Hunger Games, but not so much to where it felt like a knock off. The first forty pages kind of dragged, then immediately picked up the pace in an explosion of 50 sporadic climaxes filled with action and heart-stopping moments. Aveyard dances to the beat of her own drum: love triangles? Psshh.. More like love SQUARE; making you wait 200 pages for an issue to resolve? NOPE, more like 20 pages. My husband told me this would be an insult to Game of Thrones, but I am not a very good listener, so…. The gore, politics, soulless characters and their betrayals gave me that same “WTF just happened” vibe as GoT. Sorry, Husband.

On to the good stuff! Romance, there IS romance, but it’s laced throughout the story rather than being the focal point. Which surprisingly, I enjoyed. The main plot was interesting enough to where I didn’t feel as though I was being jipped out of a good love story. Not to mention, Mare manages to deal with the obvious crisis, while not drowning in teenage love issues. Basically, she isn’t a love-sick idiot, I adore her as a heroine. She is witty, strong, determined and has her priorities in check. Dystopian/romances have been done to death, as well as current world issues being at the center of it all (corrupt politicians, racism, unfair wages), but by combining all of the other amazingness that I mentioned, Red Queen stands out as an original.

This book is worth reading, paranormal addicts will be happy, as well as dystopian lovers. You can’t go wrong with this combination. The plot, characters, action and romance all receive an A+ from me! GO BUY IT! You won’t regret it. Three cheers for Mare!

“The truth is what I make it. I could set this world on fire and call it rain.”

“Anyone can betray anyone.”