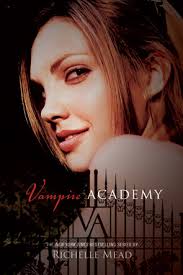 How many times can I use the word love before it becomes ridiculous? I LOVE, LOVE, love this book. Forget the snobby literature types who shame everything vampire, because Vampire Academy is worth it. Romance- check, action- check, magic- check, kick-ass heroine who doesn’t take shit- CHECKITY CHECK CHECK.

I’m going to do everyone a favor and break down the VA lingo before I give a summary. A vampire is, well, a vampire, but they can wield magical abilities, each specific to the vampire. A Dhampir is half-human, half-vampire; they do not have magic, but they are physically strong, much stronger than humans or vampires; and are born to protect vampires. The Strigoi are BAD vampires, they feed to kill, and are not born, but made (that is explained later). In a nutshell, Rose (Dhampir) and Lissa (vampire) ran away from the infamous Vampire Academy (where you learn all things Vampire and Dhampir), in fear for Lissa’s safety. But they have now been forced to return. Someone is after Lissa, and it is up to Rose to protect her while simultaneously dealing with high-school BS; and of course, their love lives, which are becoming more and more complicated.

It’s a rare day in paranormal romance whenever the heroine starts out as a bad-ass and doesn’t have to work her way there- you’ll appreciate this. Rose’s attitude, stubbornness, and fierce protectiveness over her best friend, Lissa, are just one of the MANY reasons I adore her. Yet, she has room to improve, she has some “growing up” to do, but not in an annoying teenager way. I am so grateful that VA was written in first-person, being in her head was hilarious, she is undoubtedly my new paranormal ‘it’ girl. The secondary characters were well-written, as well. Rose’s man-crush, Dimitri, was damn near flawless; which usually I despise, but not this time. He’s strong, level-headed, and can put up with Rose’s crap; if there’s a zombie apocalypse, I would want Dimitri by my side.

VA is more than just “vampires are among us”, there is an entire secret society of them, and obviously, a school for them. The atmosphere of the Academy was alluring; there is some teenage drama but I have to admit, I’ve completed this series and it is only in the first book, even so, I didn’t dislike it. The twist on vampires in a modern world, them having powers, the difference between good and bad ones, basically all of it, was really interesting. I can’t get enough of this series. My only complaint is it is a tad slow paced, all of the big stuff is stored up for the finale, but I most definitely enjoyed the ride there.

I highly suggest VA to anyone who needs a new author to obsess over, especially lovers of paranormal. This is one of Meads young adult novels, so if that is not your cup of tea, then definitely check out her adult stuff. If you enjoy one, you will enjoy them all. And to those who have seen the horrific VA movie trailer, disregard it, MTV has once again ruined something.

“Only a true best friend can protect you from your immortal enemies.”

“The greatest and most powerful revolutions often start very quietly, hidden in the shadows. Remember that.”