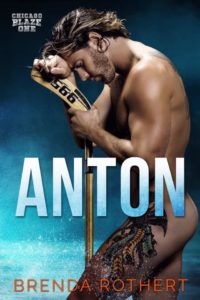 He’s known as Father Anton to his teammates—the brooding, sexy captain of the NHL’s Chicago Blaze has a reputation for…not having a reputation. Just like his diet and sleep routines, celibacy is part of Anton Petrov’s on-ice mojo. Or so they say. Anton stays mum on the subject. If the world thinks he chooses to abstain from sex, so be it. Better that than the truth getting out: there is a woman he burns for, but he can never have her. She’s his teammate’s wife, after all.

Mia Marceau is finally on her own. Now that she and her husband are living apart, she’s finding the peace she was desperate for. She spends her days in classes and late nights bartending, making her own way in the world at last. After what she’s been through, as long as her husband leaves her alone, she doesn’t plan to rock the boat. He still has the power to hurt those dearest to her, and she can’t demand a divorce with such a high cost.

A chance encounter with Mia has Anton hoping for a shot he never thought he’d get. And while she’s drawn to the intense, serious hockey center, Mia’s leery about playing with fire. That’s all Anton has ever known for Mia, though—a living, burning desire that won’t be denied—no matter the cost.

Reading Anton was like coming home after a long time away. I forgot how much I enjoy sports romances, especially when there’s a bit of thrill. I don’t know if Anton is officially considered a thriller, but for me, that’s what it felt like. The stakes were HIGH for these characters; like, their livelihood and lives were on the line.

You are probably thinking there’s loads of sex due to the cover, that is not the case. Anton is a delectable slow-burn romance. BUT, I do wish there was more action to fill the void, not sex-action, but kicking-the-asses-of-characters-I-want-to-punch-type-action. Because seriously, I wanted to punch my freaking Kindle. And not because this character was poorly written, but because they were so well-written, I became genuinely angered.

I really enjoyed Anton! I love all of the characters, minus the one I want to punch.

There’s an old guy. He’s going to make you laugh. A lot.

Such a breath of fresh air for the main dude not being a egotistical cocky douche bag. FINALLY.

A heroine with a sense of humor and a foul mouth. I love her.

“The measure of a man is in how happy his woman is. You can take that to the bank.”

“I’ll have sunshine comin’ out my ass.”