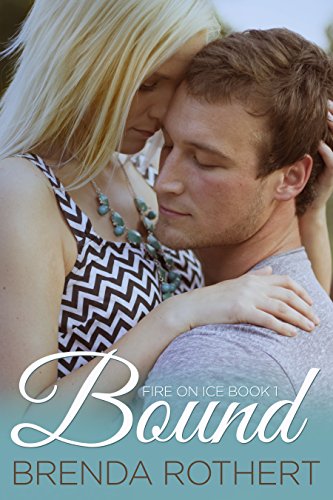 A multi-dimensional romance of a heartbreaking tale on how a brave young woman pieced herself back together after suffering an unimaginable loss. I devoured this book in a day, every word drew me in further to the hockey infused world of Bound. Never in my wildest dreams have I imagined hockey players as hot, I’m from Texas, hockey isn’t really a “thing” around here. I’ve been living life ALL WRONG.

WARNING: LOTS of sexual tension, and you know, sex too. Duh.

Kate Camden is in the home stretch, her last year of college. Then she finds herself pregnant and doing it alone. At first stricken with fear over the “what if’s” of what her life could have been, she realizes she has been given a gift. But without warning, she is struck with heartbreak, a grief unlike anything she has experienced before. Ryke, a super-star hockey player’s life was turned upside down by tragedy as well. Unexpectedly, their paths cross. Ryke knows the moment he sees her, she is broken, and in true gentlemen fashion, he wants to save her.

Bound is written in both Kate and Rykes’ perspective. I believe all romances should be written this way. The grief that Ryke and Kate went through was written with such raw and realistic perfection, it didn’t feel fictional. On the non-heart wrenching side of the spectrum, you are engrossed in the tap dance of a romance that is Ryke and Kate. Truly fickle creatures, but hilarious. And this may sound odd, but I really loved the world of hockey! Ryke is on the upswing of his career and is beginning to make a pretty penny with endorsement deals and such, giving us some fabulousness. He’s like the David Beckham of hockey, although I imagined J.J Watt (of The Houston Texans) the entire time.

A wonderful storyline with two lovable characters, you can’t go wrong with that. Brenda managed to write about loss in an eloquent way that could not offend a soul. The content can be emotional for some, but Brenda did it justice. I’m feeling the need to quote some Dumbledore to sum up this book- “Happiness can be found, even in the darkest of times, if one only remembers to turn on the light”. Sometimes, that light just happens to be a person.