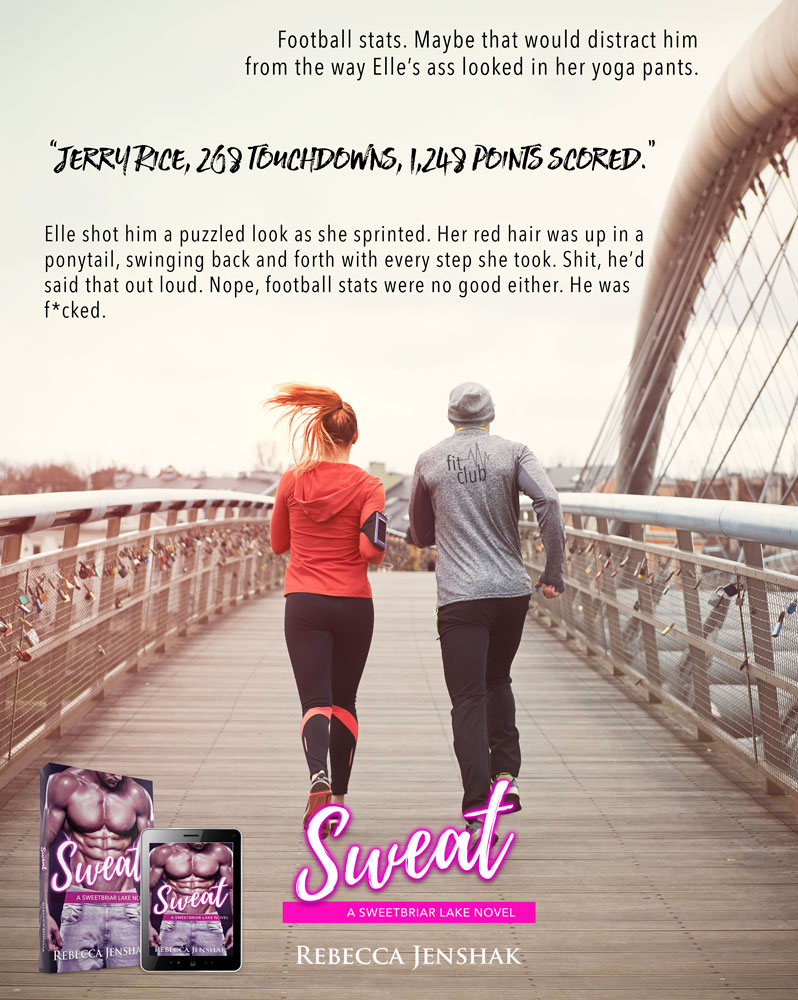 She was ready to give in and get Chinese takeout instead when she spotted Ryan across the store in the produce section. Elle tried to hide between the frozen food and dairy aisle, but Ryan looked up and waved before she could get out of his line of vision. She blushed and gave him a half wave, hoping he wouldn’t come over, even as he had started walking in her direction.

Well, well, imagine Ryan Calloway in non-athletic gear. Tiny darts of awareness zinged across Elle’s nerves. Dark jeans rose from casual brown loafers and encased powerful looking thighs. Elle’s mouth went dry, and she forced herself to lift her gaze so she wouldn’t be caught staring below the belt. A form-fitting blue sweater hugged his biceps and pectoral muscles.

Oh… peach cobbler, apple pie, hot fudge sundae. The list of forbidden, high-calorie desserts did nothing to distract Elle’s mind from the yummy factor of the man walking toward her.

Heat rose into her cheeks, and she fought the urge to fan herself. Her hand shook as she self-consciously tucked a stray bit of hair behind her ear.

“What in the world is kale?” Elle blurted before she could catch herself.

Ryan tipped his head back, and a deep chuckle emerged from his throat. “May I help?”

“Yes, that would be great, actually. I think I’m way out of my league here.” That was true in relation to standing next to Ryan too.

He led her through aisles and explained each item on the list and why it was important, when and how to eat it, and even offered some basic cooking ideas for kale, sweet potatoes, and some other items Elle had never bothered to cook before. Ryan was in his element; apparently, he truly believed in his work and the lifestyle he taught. It was intoxicating to see him this way, and Elle started to think there was more to this gym god than met the eye. He was smart, funny, assertive — and he made Elle feel like she was a friend instead of just a client he was taking pity on.

They finished filling the cart with items from the list, and Elle thanked him profusely.

Their fingers brushed at the exchange, causing Elle to jump in reaction and fumble the paper. Every time he touched her, her whole body reacted. She waved awkwardly and swerved her cart to the checkout line, putting some much-needed space between them.