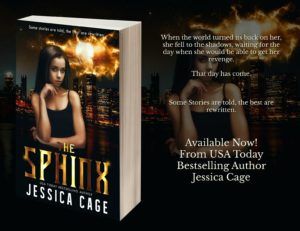 A back door sitting to the right off a dark alley gave them access to the training center. Once a thriving boxing facility, it now was used mostly for moms in yoga pants attempting their best at CrossFit. The gym was owned by the man who ran the orphanage Carter frequented. The allotment of free time, after hours, was his way of thanking Carter for his work at the orphanage.

“You want to box?” Asa asked as she watched Carter head for the relic of the past that sat in the back corner. The ring obviously wasn’t used often.

“I want to fight. Trust me, our enemies will not be in boxers’ stances.”

“That’s true enough, but then again, they won’t exactly be trying to have hand-to-hand sparring matches either. These are powerful beings. What makes you think they would limit themselves in such a way?”

“I have no doubt that they will use every advantage available to them. That doesn’t negate the fact that we will need to protect ourselves in every possible way that we can.” He jumped in the ring. “Our hands, our bodies, are one of those ways.”

“Great, so show me your master plan to fend off a god when he comes at you.” She stood outside watching him warm up. Shadow boxing imaginary demons. His form was exact, his body strong, but then again, she already knew that.

“How about you try me and see?” He stopped and held the ropes open, inviting her to join him.

“Try you? You think you can take me?” Carter was strong, but he had no idea what he was really up against. She climbed in the ring, refusing his assistance, and stood to face him. “Where was all that back in Oikos?” she teased him.

“I was caught off guard. But please, tell me something.” He leaned in close, taunting her. “Do I look worried?”

“Let’s see what you got!” She pushed him and jumped back, landing in a crouched position.

Asa held back on her first attack. She pulled her punches and moved just fast enough to test his reflexes. The man was good, matching her move for move. She punched, he blocked. She kicked, he dodged. When she retreated from him, he kept on her. To give her space would be to give her momentum for a stronger attack.

“Good, you’re a quick study,” she complimented him, but before he could thank her, she quickened her speed, dropped to one knee and swept her leg out, and knocked his feet from under him. His back slammed against the floor of the ring. Quickly she was on top of him, but he’d recovered, blocked her, and knocked her away. Their fight grew with intensity as both tested the other and then challenged with more power, more force.

The energy changed when Asa ran for Carter who surprised her. On his wrist, what looked like a normal accessory, a poor choice for fashion, was a band. He tapped the side and it lit up and emitted a white light that wrapped around her legs lasso style and tripped her.

“What the hell was that? You have magic?” Asa pulled herself up. The fight was long from over, but the rules had definitely changed.

“All of the hunters have these little accessories, talisman that transfer power to us. They were given to us to protect us. We want to keep the gods out, but we are no fools. Not every run is going to be a smooth one. Sometimes we have to fight to survive. And as you said, gods, even the weak ones, have no consideration for what is a fair game.”

“You’re right. They don’t. And neither do I!” She attacked again, this time she dodged the whip and landed a blow to his jaw. He bounced back, barely fazed, and came at her. This time it was her to issue the surprise as she used the magic of a forest nymph she’d taken out and forced a blow of air into his chest. He fell into the corner of the ring gasping for air.

“I knew there was more to you than you let on,” he grunted as the pressure against his chest ceased.

“A girl has to have her secrets.”

The sparring continued, each switching between physical fighting and magical. The gym rang out with echoes of their fight. Unfortunately, Asa got swept away with energy from the fight. It had been a long time since she’d fought a suitable opponent and Carter continued to prove himself as just that. She ducked back to dodge another blow from the whip and released a blow of her own that knocked him to the ground.

“Ha!” She jumped around the ring, celebrating. “Come on, get up. I know you got more than that.” She danced around more, mimicking his earlier shadow boxing, but Carter didn’t respond.

His breaths were there, barely, shallow and struggling. She lifted his head and listened. “Please, don’t die. You can’t.” There was no one around, no one to help and he was slipping. How could she have been so reckless? There was no choice. She couldn’t let Carter die. Knowing full well the risk that she would take in preventing his death, she laid him flat on the ground. On her knees, next to his body she began the chant, one learned a long time ago, one that would drain her, but she would survive, and she couldn’t let him die. Milíste sti zoí, ypochoríste apó to thánato. Epistrépste sto fos, antikroúste ti nýchta. She repeated the words again and again until she could feel the life returning to his body.

Carter opened his eyes. The center of his chest stung as his lungs filled with air, but the sensation was not long lasting. What the hell happened? he thought to himself. The familiar odor of sweat infused wood and the worn leather of boxing bags registered with him; the gym, they’d gone to the gym. He remembered what happened. The sparring, the excitement, the look in her eyes as she finally let herself go. He had gotten through to her, and she let her guard down. Yeah, it took trying to kill each other, but it had worked. The action of combat was exactly what she needed, complete abandonment of logic and fear. She’d almost killed him. He lifted his hand to his chest. Hell, he thought she’d succeeded, but the pain continued to subside with each breath.

Movement to lift his head from the ground caused a wave of dizziness, and he paused, waiting for it to pass for fear of fainting. He felt better, but apparently, he wasn’t at 100% quite yet. To steady himself he leaned on his elbow and turned his head just enough to get a view of Asa. She was laying just a few feet away from him. Did he manage to get a shot off?

“Okay, I didn’t mean for us to literally try to kill one another, or to come so close to succeeding.” He chuckled as he started to shift from the floor. “How bad did I get you? I don’t even remember getting a shot off.” Sitting upright, he rested his elbows on his knees. A wave of motion sickness passed slowly as he waited for her response, but it didn’t come. “Asa?”

Asa’s body remained motionless, unresponsive to the sound of her name echoing through the gym. He shook off the remaining effects of his vertigo and made it over to her. “Asa?” He lifted her head and examined her. She was okay, breathing steady, but for whatever reason, she was completely out of it. “What the hell happened? What did you do?”