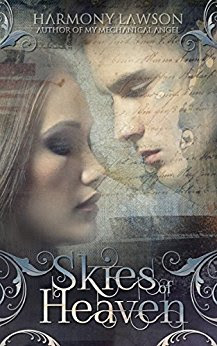 What’s It All About?
Ariella’s life had been perfect until she saw her family disappear before her eyes. Now she has found herself to be the only survivor on the planet. Everyone vanished without a trace. Just as she is about to do something drastic, she is confronted by a man claiming she is an angel with amnesia and he has been looking for her for over seventeen years. He also says that she was placed in an alternate world where she believed herself to be the only survivor. Now Rumen and Ariella have to find Raziel, the angel who holds the secrets of the universe, who knows where the book of secrets is so they can use it to protect a special group of human survivors from being destroyed by demons. Can their budding relationship endure the trials they must face as Ariella tries to remember who she is and to protect the remaining survivors of the human race? Maybe they will find love in The Skies of Heaven?

He approached me slowly and cautiously with his hands in the air. He was wearing a faded jean jacket, black jeans, and a black beanie. Then he said something in another language I didn’t understand. I looked at him, uncertainly. “Oh great, a survivor who can’t speak English. Just my luck!” I only knew one language. Sometimes I wish I would have taken Spanish but I didn’t think this man was speaking Spanish. I think it sounded like Hebrew but I couldn’t be certain.
When he realized I didn’t understand him, he said very calmly in perfect English, “Don’t jump, Ariella.”
I looked at him in shock, disbelief and fear, not really sure I believed what I was hearing. “Where did you come from and how did you know my name?” I took a step back, putting distance between us.
“Don’t jump, please. I’ve been looking for you for seventeen years when you first disappeared.” He paused, took off his beanie, and ran his fingers through his wet light brown hair before putting his beanie back on. He looked like he’d been running and he seemed relieved over something.
“What makes you think I was going to jump? I could be looking at the scenery for all you know.”
He didn’t pay attention to what I just said as he continued, “I can’t believe I found you. I thought you were lost forever. You don’t remember me?” He seemed hurt for a minute. Disappointment crossed his handsome features for only a moment. He seemed happy and his voice was uplifting.
I took in his appearance. He was gorgeous and seemed to be a bit brighter than the current dreary landscape. The first thing I noticed was his kind golden eyes and brilliant smile. His light brown hair was soft looking and peeked out from beneath a black beanie.  He seemed casual and charming. I was in black and white compared to him. He didn’t look as though he had been surviving in this harsh new world for the last several months, not like me. He looked as though he came from someplace else. I looked at him skeptically. I must be delusional. Who was this guy? I was almost angry at his intrusion in my personal conflicts yet happy to see another human face.
I felt very confused. I put my hand to my temple, closed my eyes, and shook my head. “No, I’ve never seen you before. I’ve seen no one in months, not one survivor, and then you come up and expect me to know who you are?” I felt angry.
He still remained calm and collected. “I apologize. You just look exactly as I remembered you. As expected, your memory has been erased. My name is Rumen.”
Rumen, what kind of name was that? “What do you mean ‘my memory was erased’?” It seemed incredulous. Was I dreaming or did I jump and this was hell? No, I believed my memory was fine.
He eyed me carefully. I melted in his gaze. He was truly a gorgeous man. “You really don’t know who you are?”
“No, enlighten me, please.” Did I really want to know who he thought I was? I kinda did. It was nice having a real person to talk to and not just some voice in my head.
“Ariella, you are an angel. The angel of protection to be exact and we have been looking for you for seventeen years. That’s why the world has been crumbling and the rapture happened. There has been no one to protect the Earth or Heaven.”