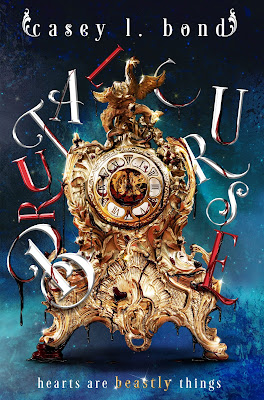 What’s It All About?
Prince Carden of Tierney lost his home, family, and claim to the throne in one fell swoop when he rebelled against his father for a cause he knew was right. Instead of wallowing in despair, he embarks on a new journey, starting a new life on the Southern Isle. When he finds himself caught in a web woven by the famously ruthless fae queen, Coeur, he insults her and she vows to teach him the most difficult and heart-breaking lesson he will ever learn: that humans are incapable of love, and that hearts are beastly things.
Arabella wasn’t really living, she was existing and surviving as best she could.  A chance encounter with Carden changes everything for her, but the deadly game he’s dragged her into might cost her life.
Still, she agrees to play. The rules the fae queen gives them are vague, and it’s obvious there are things Queen Coeur isn’t telling them. She’s sure of it. But what she does know is that together, she and Carden must pass a series of tests and trials. If they fail, game over. But if they succeed, she just might be able to restore her family and carve out the life she’s always envisioned.

“You are the first player I’ve ever wanted to place a wager on,” he proclaimed.

“Why would you do that?” Every fae in the kingdom—and especially Rule—had to know we were as good as dead.

“Because I think you might actually be able to win.”

I started to scoff, and then wondered if I could use his endorsement to our advantage. “Do you know what obstacles we’ll face?”

“I do not, sadly,” he mused. “The Queen is the only one who knows, as she will be the one to personally construct your challenges. And they will be specifically designed for the pair of you.”

“On you,” he clarified with a grin. “Only on you. And, because there is a flame within your heart. I can feel it licking at me even now.”

Embarrassed, I straightened and looked up. As I did, a star streaked across the sky.

“See? The heavens favor you.”

“That was a coincidence,” I argued.

From the corner of my eye, I watched him tuck his hands into the pockets of his fine pants and stare up at the sky. “I do not believe in coincidences.”

He grinned. “Not at all. And neither should you.”