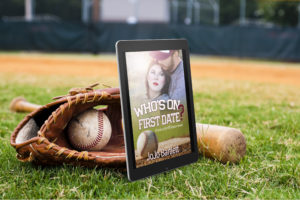 Eden’s been burned (not unlike her ex’s abandoned crap) and isn’t ready to try dating again. She lives vicariously through her co-worker’s sex life, all while veering dangerously close to being the next cat lady who has sworn off men.

When Eden stumbles (quite literally) into the life of professional baseball player, Robert “Bobby” King, more than spilled beers will get in their way.

Bobby has had a handful of one night stands and realizes he won’t find love with someone he finds leaning against the locker room door. With his focus on healing his recent knee injury and keeping his name in the game, Bobby never imagines he’d be fighting for the girl of his dreams, too.

With constant mishaps and miscommunications, and spring training around the corner, can Bobby and Eden win the game of love?

Who’s on First Date? is a full-length (75k words) novel intended for MATURE readers, aged 18+, who enjoy lots of steam with their smirks and flirts.

-Read Excerpt of Who’s On First Base @ Candace Reads-