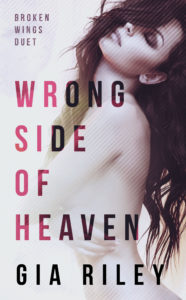 Some just talked to me.

They all had their vices.

I’m trailer trash in the slums of Carillon.

Until I met him, the mysterious neighbor who speaks through handwritten notes. He never shows his face, only comes and goes late at night, and I’m drawn to him like a moth to a flame.

I shouldn’t want him.

I don’t need him.

But when I close my eyes, he’s all I see.

He’s my addiction. The secret I keep close to my heart.

But sometimes things aren’t what they seem, and secrets don’t stay secrets forever.

And together, we’re just two lost souls on the wrong side of heaven.

One thunderstorm fades into another, and I keep my eyes on the stars, praying this one isn’t as bad as the last. It’s tornado season in Kansas—the only other force besides Tess that threatens me on a daily basis.

The crack of thunder is sharp, and the flashes of lightning so close together, I know it’s almost time to get in the closet. There’s no basement. No shelter to run to with a secret door to the underground. It’s just creaky floorboards, dust, and a protective layer of cotton pillows I bought at the dollar store.

If the storm were to pull the roof off the trailer, there’s not much else inside my room for the wind to whip around. The only other piece of furniture I own is a dresser. But I learned, whatever I put in there, Tess will take, so I keep my clothes in the trunk in the closet. The little bit of money I have is kept in a secret compartment in the floor. It’s not much, but I save every penny I earn from babysitting jobs around the trailer park.

Over the summer months, I try to pick up as many nights as I can because, without school, I spend too much time in the trailer. Too much time with Tess leads to problems.

Last night, we argued about my chest. She said my boobs were getting too big and that my mother probably had a matching set, just like all the other whores in town. If I knew anything about my mom, I’d disagree, but Tess could be right, so I didn’t bother trying to convince her otherwise.

As much as I hate Tess, she’s all I have. When my dad died, Tess decided to keep me. She said something about the money from the government helping to pay the bills. I’m not stupid. I know all that money goes up her nose and feeds her habit.

Sometimes, when Tess is exceptionally bitchy, I almost wish I had gone into the foster system. At least then I’d have had a chance at happiness. Because living in Carillon is nothing but hell. A hell I can’t escape until I turn eighteen and graduate high school.

I am me. Alone and by myself.