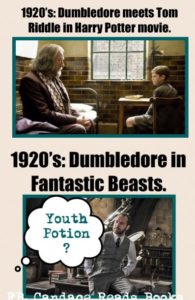 Okay. There are conflicting reports on what year it was whenever Dumbledore met Tom Riddle. Most websites say somewhere in the 1920’s, others say mid 30’s.

Either way, Dumbledore looks old as fuck when he met Tom Riddle. And whether it’s five years or ten, he aged pretty badly between Fantastic Beasts and meeting Good Ol’ Tom.

But we all know that Fantastic Beasts is trying to bring in the big names, AND I AM NOT COMPLAINING. Two hours of staring at Jude Law is not a punishment. Same goes for you, Mr. Depp.

My followers on Candace Reads Books had some theories of their own.

Jesi Dehart “Do wizards have tenure? If so then other wouldn’t be surprising if Dumbledore were to obtain tenure and be more relaxed and dressing more the way he wants than what the headm would actually prefer.”

Marie Wright “Wasn’t it a memory not a flash back and memories get distorted with time. He probably didn’t pluck the memory till some years had past. We also don’t see ourselves the same way other people do.”

Others were just as baffled as me, and those who have seen Fantastic Beasts say they walked away even more confused with Dumbledore’s timeline.

So, what do YOU think?