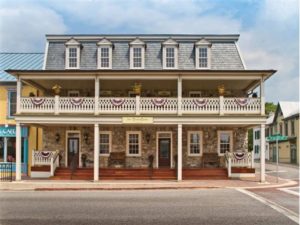 “Inn BoonsBoro may be western Maryland’s newest boutique hotel, but the history of the grand property at the corner of North Main and St. Paul in Boonsboro, Maryland begins just after the American Revolution.

According to information from the Western Maryland Regional Library, a stone building, one of two in town at the time, was built on that site in the 1790s by Peter Conn. He named the hotel The Eagle. After Conn’s death in the 1820s, the property changed hands numerous times. Owners included James Chambers, who named the hotel after himself. In 1877, local maps listed the property as The Eagle Hotel. The landlord at the time advertised that his hotel offered “good accommodation for man and beast at reasonable rates.” 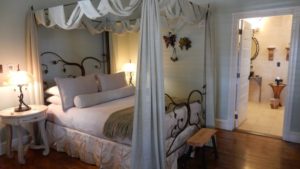 The rooms… are fracking adorable. And they are all named after characters from classic love stories. There’s even a room named Elizabeth and Darcy!

Check out ‘The Area’ link, there’s TONS of stuff to do around Boonsboro.