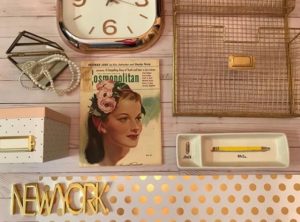 Interesting things from a 1940’s Cosmopolitan magazine I bought at an estate sale:
(Also, follow me on Instagram. @candacereads
https://www.instagram.com/candacereads )

1. A Marlboro advertisement, “the cigarettes of successful men… and lovely women.”
2. Allure used to advertise their make-up as “Pan-Cake” makeup, as though it was a positive thing. They even trademarked the word.
3. A 17 year old girl was described as luscious. Yuck.
4. There are TONS of job advertisements for women. One read “but I’ve never worked! What kind of job can I do?” Then Cosmo lists all the jobs that you’re capable of doing. This was obviously a turning point for women.
5. A questionnaire: “Is the war affecting the health of America’s young children? Fatalities from childhood diseases are at an all time low. The mothers of our youngest generation deserve a great big bouquet. They realized that the most valuable wartime service the could render is to safeguard the health of their children.” Mental health, anyone??
6. There’s a friggin’ Motorola advertisement for a “handie-talkie.”
7. John Wayne was hot as hell.
8. Unemployment of soldiers was a HUGE deal.
9. If you don’t have the right soap, no man will marry you.
10. The articles are so long… I’m realizing I have the attention span of a gold fish.
11. Soap… can apparently answer all of our life’s problems.
12. Not using paper has been mentioned multiple times, because “our army needs paper.” The irony.
13. Boss talking to employee: “We want you to be happy here. You’re pretty and capable- you can be popular, too!” It was an advert for deodorant
14. Soap.
15. More fucking soap.
16. If you don’t have white teeth, no man will want you.
17. More soap. “Want to be a girl with date appeal?”

? Shit.
18. Oh. A cream that removes freckles. “If you have to live with freckles, make it as pleasant as possible.” Ouch.
19. Soap. I’m going to stop mentioning this.
20. OMG. Lysol suggested cleaning out your vagina… with Lysol. Then there’s a story about a girl who’s husband left her because of her “ignorance” over hygiene. I mean… with all the soap, I think she’s fine.