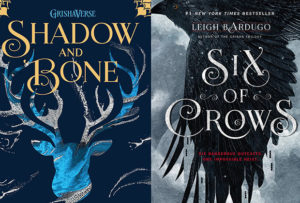 Eric Heisserer, the man who adapted the novel ‘Bird Box‘ into a screenplay for Netflix, will be turning Leigh Bardugo’s ‘Shadow and Bone‘ & ‘Six of Crows‘ into an eight-episode drama series for Netflix. He’s going to merge characters, concepts, and all that jazz from each series into ONE awesome sauce experience.

Basically, the two books are set in the same world but with different characters. Basically, Heisserer is going to put them in a blender and make a Shadow Crow Cocktail.

Netflix describes the merged books as: “In a world cleaved in two by a massive barrier of perpetual darkness, where unnatural creatures feast on human flesh, a young soldier uncovers a power that might finally unite her country. But as she struggles to hone her power, dangerous forces plot against her. Thugs, thieves, assassins and saints are at war now, and it will take more than magic to survive.”

Haven’t read either series? No Worries! Check them out and read a sample on Amazon.